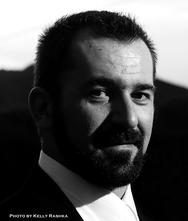 Hamdija Ajanovic, \'hum-'de-uh\ \'i-än-'o-'vich\, is an American composer, music producer and multi-instrumentalist. Born in May of 1973 in Derventa, town in northern Bosnia and Herzegovina (former Yugoslavia), Ajanovic spent most of his childhood in music school, where he studied music theory and received a classical music education with guitar as the major instrument.  By his 16th birthday, he was well immersed in the local music scene, playing electric guitar and performing with various bands.

In the early 1990s, Ajanovic moved to Germany and settled in Kassel where he lived and worked as a performing and recording musician, guitar instructor, and a vocal coach.  Upon his move to Tucson, Arizona in 2000, he enrolled at the University of Arizona and earned a degree in film with highest honors.  With extensive music knowledge, musical versatility, ability to play multiple instruments, and a university education in film, Ajanovic stirred his career towards creating musical scores for motion pictures and video games.  Ever since, he has been scoring award winning films and composing music for video games that had both national and international success.

In addition to composing work, Ajanovic, a member of ASCAP and Game Audio Network Guild, an endorser of Ollo Audio, has been recording, producing, and performing music with power duo Quarter Royale, which finds influences and inspiration in blues, rock, and ethno sounds and rhythms of Balkans and Eastern Europe, as well as a virtual band Sindrom Epik, with members working remotely from four different countries.